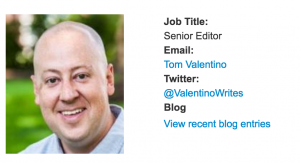 With the holidays approaching, it’s fun to think back to Christmas mornings of my childhood.

The scene at the Valentino house was like that of many families: My sister and I would wake up at an ungodly hour and drag our parents out of bed. Bleary-eyed, Mom and Dad would head downstairs to brew coffee and set up our video camera to preserve the memories for years to come on VHS tapes. And after what felt like an eternity of waiting at the top of the stairs, we got the green light to sprint toward the living room and see what Santa Claus had brought down the chimney the night before.

We were very fortunate. I recently asked my sister to name her favorite gift from Santa, and she quickly recalled a baby doll nursery set that got years of use. At the top of my list was the time in the late ’80s when I was greeted by a Nintendo console under the tree. (Side note: How wild is it that, in 2016, the hardest gift to find in any store is … an updated version of the classic Nintendo?)

Most years, there were two other small items we could reliably count on seeing in our stockings: a candy cane-shaped tube of M & M’s and a scratch-off lottery ticket. As I learned last week when a press release from the Association of Problem Gambling Service Administrators (APGSA) showed up in my inbox, however, that last one might be grounds for Santa to put his own name on his naughty list today.

“Research tells us that the sooner a child begins to gamble, the more likely he or she is to develop problem gambling issues later in life,” APGSA President Lori Rugle, PhD, said in the release.

Rugle went on to explain that about half of those with gambling problems have had a big win early in their lives—like, say, a tidy sum won on a scratch-off ticket in a Christmas stocking.

It makes sense, because the human brain doesn’t fully develop until our early 20s, making youths more susceptible to being swayed emotionally by the excitement of a win and an unexpected influx of cash. A study published on KnowTheOdds.org indicates 2.1% of U.S. residents ages 14-21 struggle with problem gambling and another 6.5% are at risk, with children being four times as likely to develop a gambling addiction if they begin gambling by the age of 12.

(For what it’s worth, the largest amount anyone in our house won as far as I can recall was about $10, and the biggest win I ever enjoyed on Christmas morning was getting through the first few levels of Super Mario Bros. and Duck Hunt.)

Given what we know today, my wife and I probably won’t have any lotto tickets at our house this year—certainly not for our daughter, anyway. But if Santa happens leave a new Nintendo under our tree, I’ll be more than happy to call on Super Mario to try my luck in rescuing the princess from King Koopa again…

Valentine,Tom. ” Bad Santa: Scratch off lotto tickets a no no for kids”. Addiction Professional. December 14, .2016

Did you know that in OH, males ages 18-34 are the highest demographic at risk for developing a problem with gambling? Even so, anyone can be impacted by #ProblemGambling so it’s important to #KnowYourRisk by taking the free 2-minute quiz at http://BeforeYouBet.org/the-quiz.
#BeforeYouBet

It’s been about a year since China put in place government restrictions on how long children could play video games. Find out how the effort has affected the gaming industry: https://bit.ly/3LVnlzi
#ChangeTheGameOhio #YouthGaming

#GamblingTwitter is wildly popular & with legal #SportsBetting starting in Ohio in 2023, it’s important to make sure that people see #ResponsibleGambling messages on social media. Read about how social media is impacting sports betting: https://bit.ly/3VCMmTT
#BeforeYouBet