On Saturday night in Las Vegas’ T-Mobile Arena, Floyd Mayweather will finally take on Conor McGregor in a boxing match. The big fight is almost here, and it will be the most-bet bout of all time in Nevada.

Which fighter should you bet on? Are there any prop bets worth taking a flier on? Does McGregor actually have a chance at knocking Mayweather out?

Here is our all-encompassing betting guide, which includes a graphic on how the odds have changed, along with best bets on the fight from both our boxing and MMA experts (Johnny Wilds and Reed Kuhn), and several boxing sharps.

Jeff Sherman, sportsbook manager at the Westgate Las Vegas SuperBook, opened the fight on Feb. 16 (before the fight was even official) with Mayweather -2500 and McGregor +1100.

“The line was split more between true odds and betting odds. Rarely does the public wager much on anything that is not officially announced,” Sherman told ESPN.

When the fight was officially announced on June 14, the price “opened” with Mayweather -1100/McGregor +700. Since then, consistent support has driven the price down to its current line of Mayweather -550/McGregor +400. Sherman posted the fight with a total of 9.5 rounds over +135 and under -155 and currently is at under -170/over +145. As of Tuesday afternoon, the Westgate is facing a six-figure loss if McGregor somehow pulls off the win.

How the Vegas odds have changed 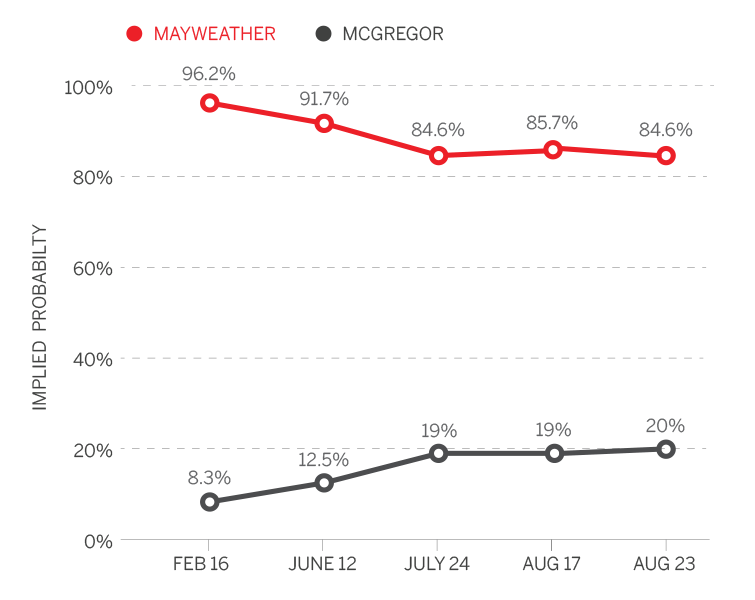 It’s been about a year since China put in place government restrictions on how long children could play video games. Find out how the effort has affected the gaming industry: https://bit.ly/3LVnlzi
#ChangeTheGameOhio #YouthGaming

#GamblingTwitter is wildly popular & with legal #SportsBetting starting in Ohio in 2023, it’s important to make sure that people see #ResponsibleGambling messages on social media. Read about how social media is impacting sports betting: https://bit.ly/3VCMmTT
#BeforeYouBet

Placing a bet on sports only takes a few seconds online. But too much fast betting can lead to greater risks. Learn how to bet responsibly at http://PauseBeforeYouPlay.org #PauseBeforeYouPlay #BeforeYouBet #SportsBetting