COLUMBUS (AP) — The percentage of Ohioans deemed problem gamblers has doubled since the implementation of racinos and casinos five years ago, according to a survey released Wednesday whose results state leaders say they expected.

The $1.3 million survey was a follow-up to one conducted in 2012 ahead of the implementation of casinos and racinos, or horse tracks outfitted with video slot machines.

Ohio’s rate has grown slowly and there’s no reason to think it will reach the national average because of programs the state put in place early dealing with education, treatment and prevention, said Matt Schuler, Ohio Casino Control Commission executive director.

Betting at casinos and racinos and taking sports bets topped the list of problem gambling, followed by the Ohio lottery and the stock market, the survey said.

Tips for avoiding at-risk gambling include making a budget and sticking to it before gambling and not gambling on credit, said Stacey Frohnapfel-Hasson of the Ohio Department of Mental Health and Addiction Services. 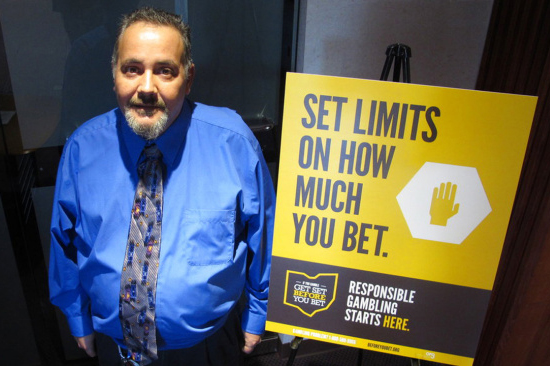 Recovering gambling addict Jayson Saylor prepares to attend a meeting where the results of a gambling problem survey were released, on Wednesday, Oct. 18, 2017, in Columbus, Ohio. Saylor, 44, said his addiction to instant bingo tickets at times cost him his entire disability check. He said he hasn’t placed a bet in six months as he fights what he calls an “insidious disease.” (AP Photo/Andrew Welsh-Huggins)

Those are some of the lessons followed by recovering gambling addict Jayson Saylor, who attended the release of the survey results Wednesday.

Saylor, 44, of Reynoldsburg in suburban Columbus, said he compulsively bought instant tickets at bingo parlors. At least twice, he gambled away his disability checks, leaving him without money for rent and other expenses. He suffers from degenerative disk disease and a neurological condition.

Saylor receives counseling through a local addictions service agency and said he hasn’t placed a bet in six months. But he continues to fight what he calls “an insidious disease.”

“It’s really hard for me to not gamble,” Saylor said. “It takes me down further every time I do it. I know what the results are going to be, but I just can’t stop sometimes.”

A gambling consultant in the UK has asked the country’s officials to ban the sale of loot boxes to children under 18. This is due to concerns about the video game feature’s impact on youth & their #MentalHealth. Learn more: https://bit.ly/3SCXS0z
#ChangeTheGameOhio #YouthGaming

Looking at life with a positive attitude can significantly benefit your #MentalHealth. With #HappinessHappensDay coming up tomorrow, make sure you take time to share joy and happiness with those around you!
#BeforeYouBet

Does gambling make you feel isolated? There’s always someone on the other side of the #ProblemGamblingHelpline. Trained and understanding specialists are there to answer your calls 24/7. Call the helpline today at 1-800-589-9966.
#BeforeYouBet #MakeTheCall #HelpStartsHere