The Science of Addiction and Withdrawal

The Science of Addiction and Withdrawal

When you think of someone who has an addiction, you often think of someone who is hooked on alcohol or drugs, however, you can also be addicted to behaviors. Being addicted to gambling, sex, or online activity may seem confusing at first, but behavioral addictions are ultimately as chemical as substance addictions. Because the chemicals that cause addiction naturally occur in the brain, there are withdrawal symptoms associated with behavioral addictions that are very similar to those experienced by long-term drug users.

Drugs effectively work on the natural processes within your brain and often release large quantities of dopamine and endorphins, but they are intended for use by the body in ordinary circumstances. Dopamine is used as a “motivator” and reward chemical, and is used to make us like doing things we need to do, so it’s possible that other activities can stimulate the release of these chemicals, too. This is why behavioral addictions are effectively the same thing as drug addictions—both behaviors are the repeated pursuit of a rewarding experience, despite serious repercussions.

What Goes Up Eventually Comes Down

When a behavior, such as gambling or substance abuse intake, suddenly stops, the brain is overwhelmed by a sudden overabundance of neurochemicals, producing withdrawal symptoms, such as agitation, anxiety and restlessness. Since many people use substances or activities as a way to “self-medicate” for psychological issues, such as depression, these moods will be particularly noticeable during withdrawal. 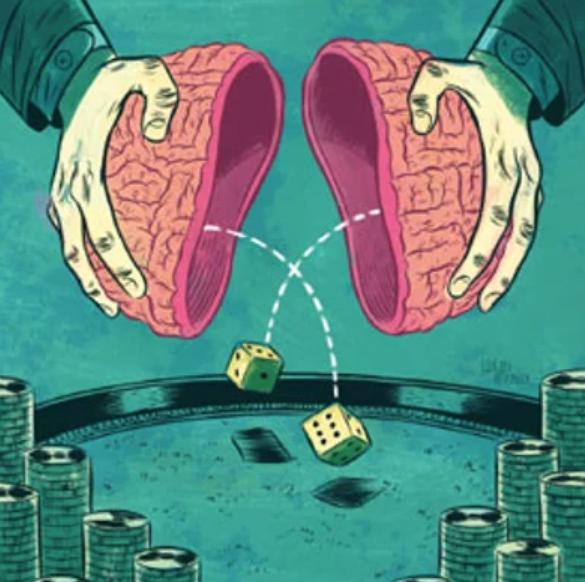 Studies on specific behavioral addictions have revealed different symptoms. For example, in a piece of research on gambling addiction, cravings, irritability, and restlessness were the most widely-reported symptoms, but insomnia, headaches, diarrhea, difficulty breathing and muscle aches were also reported. These symptoms weren’t found to correlate with a substance abuse problem, and were more severe in those who gambled more heavily.

Withdrawal symptoms are ultimately related to the brain’s chemical imbalance, and it’s important to remember that the brain will re-adjust itself with time. If you think you or a loved one may be struggling with a gambling disorder, there IS help. Please check the Get Help page for resources in your area.

Did you know that 6.5% of youth ages 14-21 are at risk for problem gambling? National Child Health Day is today and it is time to focus on your child’s health by testing your knowledge of #YouthGambling. Take the quiz: http://changethegameohio.org/quiz/.
#ChangeTheGameOhio #ChildHealth

If you’re feeling isolated because of #ProblemGambling, connect with our trained specialists 24/7 by calling the free #ProblemGamblingHelpline at 1-800-589-9966 or texting 4HOPE to 741741. More free resources online at http://BeforeYouBet.org/get-help
#BeforeYouBet #MakeTheCall